No one has a Growth Mindset any more than anyone has a Fixed Mindset, because neither of these Mindsets actually exists in real people, in the real world.

When we are learning about Mindsets, it helps to juxtapose the Fixed and Growth Mindsets: to see the world from these two very different points of view.

People with a Fixed Mindset believe they can’t change much. As a result they give up easily. They don’t take risks. They ignore feedback. They despise effort, and their world is one of doing there best to look good.

People with a Growth Mindset understand they are capable of change. They embrace challenges. They take risks, and are prepared to make mistakes. They concern themselves with applying effort in order to master new things and grow.

The trouble is, no one is actually like that. It’s not a case of having EITHER a Fixed Mindset OR a Growth Mindset. In the real world we all have varying degrees of both; we have a Mixed Mindset.

Why does this matter? As educators, when we start thinking about Mindsets, not as a state, but as a continuum, it opens up some powerful insights about how we can work with them in our classroom. 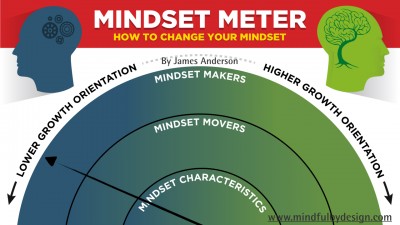 Mindset Movers are the lived experiences that students have that influence their overall Mindset. For example as Carol Dweck showed, praising students for being smart tends to move a student’s Mindset towards a lower growth orientation. Being praised for how you’ve work, tends to push it towards a higher growth orientation. There are many different types of Mindset Movers.

As teachers we want to move the meter towards higher growth orientation. This is where Mindset Makers come in. Mindset Makers are the teacher actions, our pedagogy and school structures, which create student’s Mindset Mover experiences.

Let me share with you a story about a student I once taught, that helps to illustrate this idea.

Rohan was in year 7, and felt that he struggled with maths. He’d actually improved and grown a lot over the years, but each time he got better, the system moved the measuring stick, and he stayed labelled as “below standard” – despite the fact that his standard was improving.

One day, in a fit of frustration, Rohan pushed his books across the table exclaiming “I can’t do maths!”.

My Mindset Maker action was to tell Rohan that he could do maths, and to make the point, asked him if he thought he could do grade six maths.

I explained that it wasn’t that he couldn’t do maths, it was just that he hadn’t learnt how to do this maths yet. He had learnt maths in the past, and would again.

I then pointed out to him, that if I took one of the boys in the class that was finding the work easy, and gave them year 9 work, they’d probably feel just as frustrated as he was now.

Simply changing the measuring stick, showing Rohan how far he’d come, recognising that he could in fact do maths, that he was just at a different stage of learning than some others in the class, and that everyone found learning new maths difficult, was a powerful Mindset Mover and made a huge impact on Rohan.

For Rohan that one small incident completely flipped his mindset. He went on to approach his work with renewed enthusiasm, confidence, and an air of wanting to persist as he took on new challenges.

All of which lasted for about 20 minutes!

After 20 minutes the weight of all his previous lived experiences, all those previous negative Mindset Movers that he’d temporarily forgotten, came back to him and he flipped back to a more low growth orientation. But importantly one that slightly higher growth oriented than before.

We set ourselves, and our work with Mindsets, up for failure if we expect students to suddenly flip their mindsets. A more realistic expectation is for teachers to create experiences that help slowly shift a student’s mindset, towards an increasingly Growth Oriented Mindset. Our success is not measured by the number of students in our class with a Growth Mindset, but rather how much more growth oriented we have helped our students to become.

As Carol Dweck points out, a Growth Mindset is not a declaration, it’s a journey. Our job as teachers therefore is to recognise that there aren’t two types of Mindsets, there’s a whole continuum along this journey. Our job is to help students build an increasingly Growth Oriented Mindset, little by little, along that journey.

This article was posted in All, Mindsets and tagged Mindsets.