Not all Effort is Created Equal

I am increasingly of the belief that we should ban the word “effort” from the classroom.

Praising effort has become all the rage in education—all in the name of Growth Mindsets.

The argument goes something like this: If we praise students for their ability or achievements we detract from the importance of their efforts. So “Great Work!” is out. So are “You’re so clever!” and “You’re a natural at this”. By focusing on who they are and what they did, rather than how they did it, we contribute to the development of a Fixed Mindset.

The alternative, we are told, is to praise “effort”. “Great effort!” is supposed to be a way of praising students for how they go about learning. The trouble is that not all effort is great effort! Some of it is very ordinary, and in some cases it’s completely ineffective.

When Carol Dweck advocated praising effort, what she was trying to do was focus attention on the behaviours that lead to growth.

It’s essential that we don’t lose sight of the fact that at the end of the day it is the growth, which education is all about. Dweck was simply pointing out that we should attribute that growth to what the student does, rather than who they are.

Not all effort is created equal.

To explore this idea I have created the Effective Effort Matrix. The matrix considers both the skillfulness of the student’s learning behaviours as well as the process those behaviours are being applied to, in order to achieve growth. 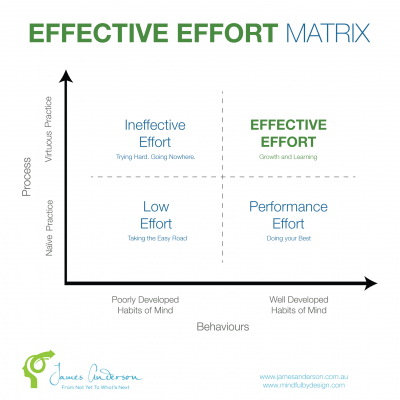 Let’s take a moment to consider the axis before considering the four types of effort.

The behaviours axis describes the actions students take in learning situations. Costa and Kallick describe these as Habits of Mind. Highly effective learners have very well developed Habits of Mind, which they apply skillfully and mindfully when confronted with challenging tasks. The more difficult and complex a task, the more highly developed the Habit of Mind needs to be in order to succeed at it.

The Process axis describes the effectiveness of the learning process—how we practice while we’re learning. Naive Practice, so called because people often engage in it with the incorrect belief that it will result in growth, typically does not involve any intellectual stretch, is unfocused and undirected. Rehearsal is an example of Naïve practice. Simply repeating or rehearsing something you’ve already mastered, is not likely to result in growth.

Simply repeating or rehearsing something you’ve already mastered, is not likely to result in growth.

On the other hand Virtuous Practice has the effect of producing growth. It occurs slightly beyond one’s current level of competence, in the Zone of Proximal Development. It is highly focused, on small incremental learning outcomes. It is called “virtuous” because it results in development of new learning schema, which are then built upon to contribute to further growth and development—a virtuous circle. (See Peak, by Anders Ericsson)

When we see students working on tasks that are too easy for them, often in ways that require only basic skills, we are seeing Low Effort. Because the work is easy, the quality is likely to be high, with few errors. The student might be “concentrating” or otherwise “busy”, but they aren’t learning anything new, and they aren’t being challenged in any way—either in the content or the process of learning.

Answering the easiest questions, where the answer is already known or easily produced, is an example of Low Effort. Low effort can also be seen when learning new things that are simply well within the student’s current capacities. For example asking an adult to learn their 13 times tables would be an “easy thing they haven’t done yet”, and would require low effort.

While students engaging in low effort might be “on task” they are not likely to be experiencing growth. Mistakes made when applying Low Effort are likely to be “sloppy mistakes1” and therefore have low learning potential. Praise of this sort of effort will simply lead to further under performance.

Students applying Performance Effort are doing their best, reliable, reproducible work, and are inside their comfort zone. Energy and skill levels are high. This is the sort of effort that is appropriate in performance situations (e.g. exams and exhibitions).

Students engaged in Performance Effort are not in their zone of proximal development, so are not experiencing the stretch required to grow. Mistakes in this context are generally avoided. As a result Performance Effort tends not to lead to growth.

While there are times when we want students to demonstrate mastery, in most classroom situations growth is the goal. So when we see students retreating to the safety of Performance Effort our response generally has three components:

For example: “It’s great to see that all that hard work has paid off and you’ve mastered this level of work. Now it’s time to work on something harder so you can learn and grow. School is about learning, not simply demonstrating what you know.”

Students applying this sort of effort are being challenged, spending lots of energy, but lack the skills to meet that challenge. Students are “working hard”, but to little effect.

Students applying this sort of effort can become frustrated with their learning. If they have been surrounded with Growth Mindset messages in the classroom they may start saying things like “I can’t do this yet”.

However, if teachers aren’t helping students develop more effective learning strategies and Habits of Mind,“I can’t do this, yet” may become “I STILL can’t do this yet!”

Unfortunately this sort of effort is often praised as a “consolation prize”. When we can’t praise students for achievement, at least we can be tempted to praise them for “trying their best”. Teachers need to resist praising this sort of effort, and instead direct students to more effective effort.

When we recognize students applying ineffective effort the type of praise we give should have the following qualities:

For example: “It’s great to see you working so hard on that task. That’s a really difficult task and you’ll need to work hard at it! I can see you’ve tried several strategies to help you solve it, which is great, but they don’t seem to be working for you. What other strategies do you think you could try? We want to see you progressing, not just working hard.”

It’s possible that a student engaged in this sort of effort is too far outside their zone of proximal development and needs to come back a few steps to master prior learning before moving on. In this case the skill that needs to be developed or supported is identifying the zone of proximal development—problems that are just slightly beyond their current ability. There are no short cuts.

Mistakes made when engaged in Effective Effort are “stretch mistakes1” so have high learning potential. They help identify learning needs at a point where we are capable of making the small adjustments required for incremental growth—they act as signpost on a pathway towards future growth.

Students engaged in this sort of effort are seeing regular, incremental growth in learning. They are able to recognize that their behaviours (efforts) lead to growth, and as a result, are more likely to develop the understanding that they are capable of change and responsible for their own growth—a Growth Mindset.

Effective Effort is the sort of effort that is truly worthy of the praise “Great Effort!”

How Do We Praise “Effort”

The problem is that just saying “great effort” is too vague and too easily confused with low effort, performance effort and ineffective effort. On the other hand, saying “Great effective effort!” just doesn’t fit with our vernacular.

We can, however, ensure that students understand the different sorts of effort, by teaching them about this matrix. This would help them identify the sort of effort that they are engaging in, and what’s expected in the classroom.

A word of warning: The term “effort” is so pervasive and used so frequently in non-learning contexts that we are unlikely to ever get to a point where we can say “great effort” to a student and be sure they are clear that we are praising them for being slightly outside their previous best, developing both their behaviors and understandings while engaged in virtuous practice. Realistically, and whether you like it or not, when we use the word “effort” in the classroom,there are few school communities that would have a strong shared understanding of what effort means.

there are few school communities that would have a strong shared understanding of what effort means
.

That’s why I’m increasingly of the belief it should be banned—or at least used more sparingly—in the classroom.

What can we say instead?

As an alternative to praising “effort”,praise should be directed at the specific actions that lead to the growth.

praise should be directed at the specific actions that lead to the growth
For example:

In short, do what Carol Dweck has advocated and praise the behaviors that lead to growth. We just need to be clearer and more specific about the way we do it if we want students to consistently associate the right sort of effort with growth, and therefore develop a Growth Mindset.