In the past, making a mistake was something to be avoided at all costs. How many times were you too afraid to put your hand up at school in case you had the wrong answer? And you certainly didn’t celebrate when you saw red crosses on your page.

Sometimes, mistakes really do need to be avoided. In performance tasks, we don’t usually want to make mistakes. And some mistakes can have serious negative consequences. We certainly don’t want to raise a generation that thinks any mistake, any time, is OK.

But most of the time, school isn’t about performing. It’s about learning. And from a learning perspective, mistakes are necessary and helpful. They tell us where we need to focus our effort to gain mastery and grow.

Psychologist Carol Dweck realised that the negative connotations applied to mistakes were contributing to the Fixed Mindset. To someone with a Fixed Mindset, a mistake is permanent, a sign of their limits. As a result, they might avoid or ignore mistakes rather than engage in a learning process to correct them.

So, to nurture a Growth Mindset, teachers began encouraging students to recognise that mistakes were part of the learning process. In fact, if we are stretching ourselves, we should be making mistakes. Even the mistakes we don’t want to make, in performance situations, can help us learn. (See [1]Mistakes are not all created equal, by Eduardo Bricneo for more about different types of mistakes)

However, we are now faced with a new problem. The pendulum has swung too far to the other side. In an effort to avoid the negative connotations previously associated with mistakes, we’ve begun to praise them. We’ve moved beyond simply accepting mistakes to celebrating them.

Some people have misinterpreted Dweck’s research to mean that we should counter the old negative connotations of mistakes by applauding them as good things. In fact, in a learning context, mistakes are neither good nor bad. They are simply signposts that tell us what we are yet to learn.

This problem is especially evident on social media, where memes focus on the mistake rather than the actions we take to learn from them. Here I’ve listed some of the common memes about mistakes in social media, and corrected them for you. 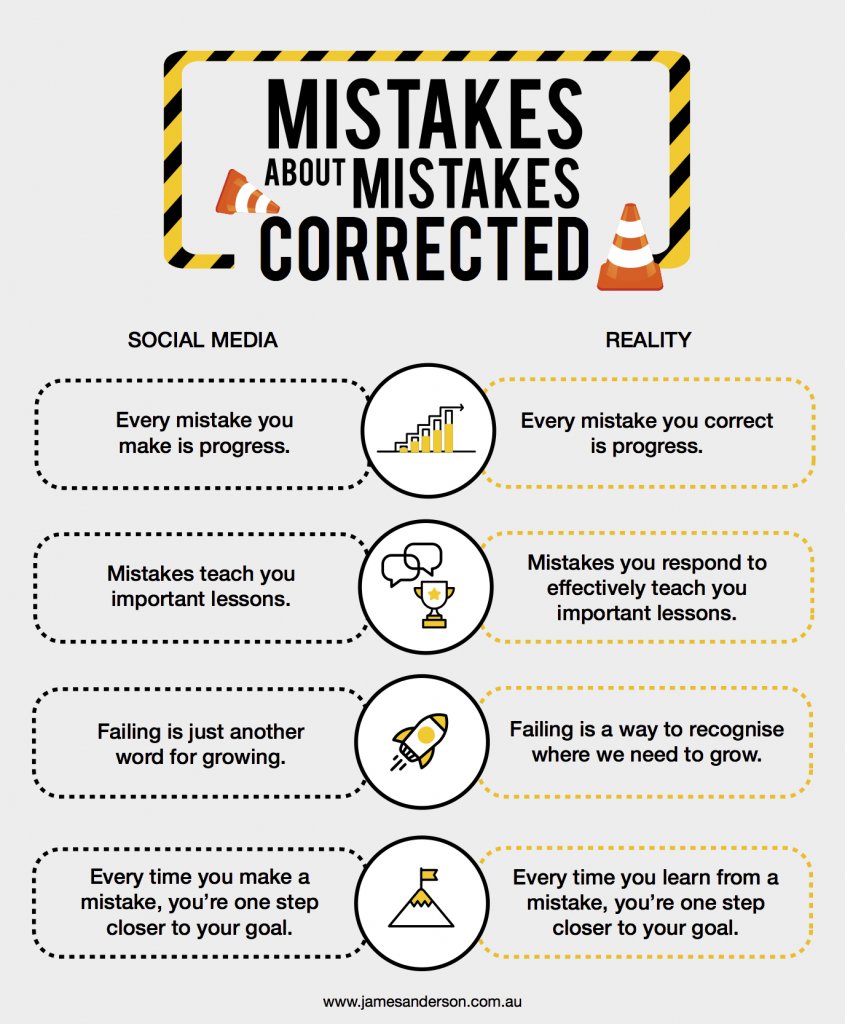 Instead of praising and celebrating mistakes, we need to praise actions that lead to growth.

There are two elements to praising actions:

There’s a lot of truth in Thomas Edison’s famous quote, “I have not failed. I’ve just found 10,000 ways that won’t work.” The inventor recognised that by stretching himself beyond his comfort zone, he had the opportunity to learn from what happened. He could guide his future learning and eventual success. But we don’t praise Edison for his mistakes; we celebrate that he learnt from them and invented the electric light.

Ultimately, we don’t want to make the same mistakes. We want to correct them, master the learning and move on to new learning – where there will be new mistakes to make and learn from. And we don’t want a generation that thinks mistakes, in any context, are a good thing. The goal of learning something new is to do it proficiently. We must move through mistakes to mastery and new learning.

The good thing about mistakes is that they are temporary. As educators, we build resilience when we teach students the role mistakes play in learning. We must show students that mistakes are a natural – and neutral – part of the learning process. They do not define us or tell us whether we are good or bad at something. Rather, they indicate where a student’s learning is at that point in time.

By shifting our focus from the mistake a student makes to the actions they take to overcome it, we open the door for their future growth, and the development of a Growth Mindset.