Beliefs don’t work! So why do Mindsets?

Carol Dweck has shown that student’s who hold the belief that they are capable of developing even their most basic characteristics, tend to do just that.

But why should a belief work?

Believing in fairies doesn’t make them real. Believing I’ll win the lotto this weekend won’t make winning any more likely. And if I stopped believing in gravity I doubt my world would change very much either!

The thing is, beliefs don’t work … unless they reflect an underlying reality. 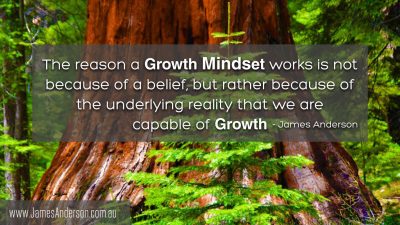 The reason a Growth Mindset works is not because of a belief, but rather because of the underlying reality that we are capable of growth.

There is now a large body of research that demonstrates that our most fundamental characteristics such as talent and intelligence are in fact malleable. Intelligence is learnt (Robert Sternberg), our brains are not hard wired, and talents are acquired not inborn (Erricson).

When we have a Growth Mindset, that belief leads us to engage in the process that actually results in growth. But it’s the process, the hard work and effective effort, not the belief, that does the work of helping us develop.

Having a Growth Mindset is not even a prerequisite to experiencing growth. There are many examples of high achieving individuals who hold a Fixed Mindset. Carol Dweck uses the example of John McEnroe as one individual who became very good at tennis because of the type of practice he did, but held the belief that it was because he was fundamentally better than others, which lead him to the characteristically fixed mindset response of blaming outside influences.

The only prerequisite to growth is that you effectively engage in the process that leads to growth.

So am I playing with semantics? Is the distinction between belief and understanding really that important? If the belief leads to the process, does it make a difference if as educators we talk in terms of belief?

In my experience, yes! And here’s a few reasons why.

Firstly, the reason some student might have Fixed Mindset is because their lived experience has taught them they aren’t capable of much growth. This is likely to be because they haven’t entered into the processes that lead to growth, or haven’t done so effectively, but none-the-less the end result is that they’ve learnt they don’t grow.

So for this student, asking them to “believe” they can grow, is effectively asking them to lie to themselves – to contradict their lived experiences. In a very real way, it’s not so far from asking them to stop believing in gravity. So for the student who “knows” they don’t grow, asking them to engage in positive self talk probably isn’t likely to be very effective.

When we focus on effective effort and process as the pathway to improvement, then more improvement comes from more effort and more engagement in that process. To me, this seems much more likely to result in real growth.

But for me, as an educator, the real danger with approaching this work with an emphasis on self-belief, is that it lays the bulk of the responsibility for developing a growth mindset with the student.

Ultimately growth doesn’t happen if students aren’t shown how to engage effectively in the process that leads to growth. Part of being a Growth Mindset Teacher may be about working on belief, but a large part also has to be about engaging students in the process, and teaching them how to do so effectively.

If our beliefs are born from our experiences, then one of the best ways to develop a Growth Mindset is to ensure our students are experiencing growth. From this growth is born the understanding that effective effort will lead to growth and improvement.

Guiding students in successfully experiencing this growth is a pedagogical question, not a question of belief. So in our classrooms and staff rooms I advocate discussions about understanding the processes that lead to growth, rather than beliefs in our abilities. In this way students develop a Growth Mindset as an outcome of their experiences. 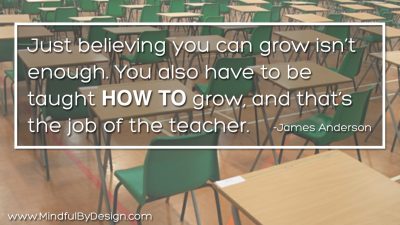 There is a circular logic to all of this. Beliefs lead to actions. Effective actions lead to experiences that reflect the reality that we can grow and develop. Repeated experiences build our beliefs and understandings of the process, which lead to further actions. All of which we then recognise as a Growth Oriented Mindset.

As educators it’s our job to ensure that students are engaging effectively in the processes that lead to growth. If we don’t, then we break this cycle, and the experiences will tend to be ones where students don’t grow, and their Mindsets will become fixed.

Just believing you can grow isn’t enough. You also have to be taught how to grow, and that’s the job of the teacher.

This article was posted in All, Mindsets and tagged Mindsets.